by sephina
in Architecture
10 min read
0 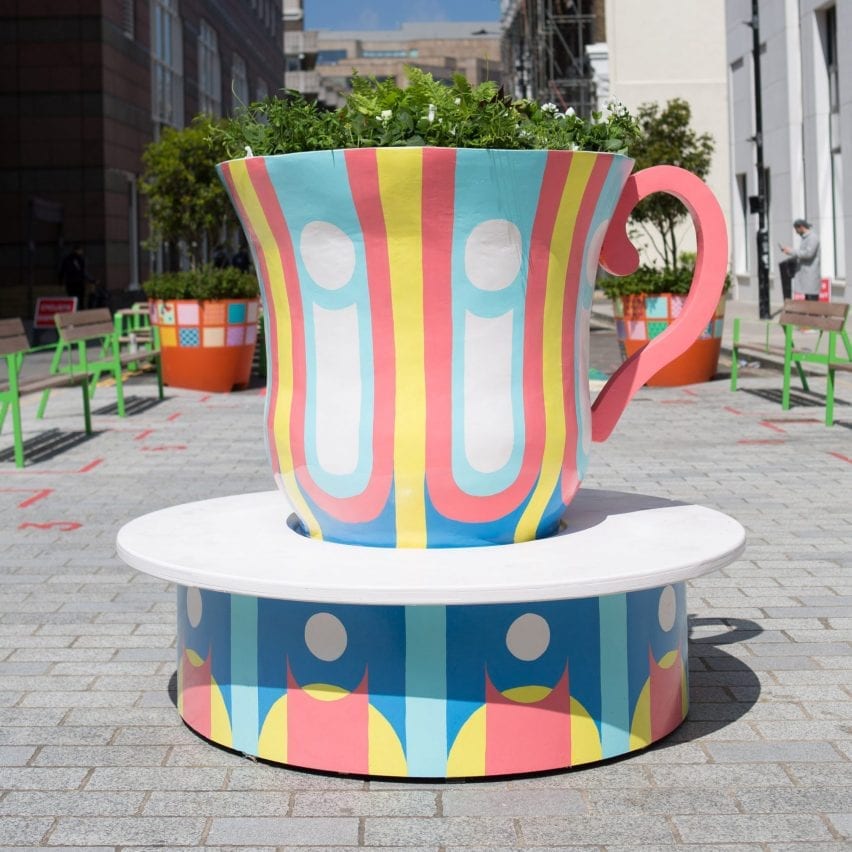 A stone courting bench and a giant teacup are among nine imaginative seating designs that architects and designers have created for the London Festival of Architecture.

Dotted through Aldgate and the Cheapside financial district, the street furniture was made for London Festival of Architecture’s (LFA) annual City Benches competition that aims to showcase emerging creatives.

The nine winning benches respond to the theme of this year’s festival, care, and invite discourse on how people can better support each other and the environment.

“City Benches is now an established fixture in the London Festival of Architecture’s public programme, and it’s exciting to see how the programme has expanded for 2021,” said Rosa Rogina, the programme director for LFA.

“Despite the constraints of the pandemic, this year’s diverse group of emerging architects and designers has risen to the challenge with a fantastic series of installations that enliven the City of London and Aldgate, and bring architectural creativity to new public audiences.”

The Conversation bench is a contemporary interpretation of a 19th-century courting chair. It is made from interlocking stone offcuts that can be disassembled and reused.

It was designed by NVBL with Webb Yates Engineers and The Stone Carving Company for a site next to the Aldgate Pump to advocate the use of stone as a durable and sustainable building material.

The timber Quick Getaway bench in Bow Churchyard was created by Ex Architectures with Flu-or Arquitectura as “a holiday-inspired oasis in the heart of the city”.

It comments on travel as a form of care that many people have been deprived of throughout the Covid-19 pandemic due to national lockdown restrictions.

Another seat in the Bow Churchyard is The Friendly Blob, made by Jelly Collaborative as a reminder for people to take care of their mental health.

It also doubles as a miniature model of the City of London to encourage visitors to explore and learn together about the capital’s architecture.

The wavey It Takes Two bench by 10F invites users to sit at either end. This is a nod to the new ways that people have occupied public furniture during the pandemic to maintain physical distance.

It is made from recycled blue plastic, informed by old public amenities in the capital such as decommissioned police boxes.

Hoped to encourage interaction, Lisa McDanell Studio’s Plant Yourself Here seating comprises two scooped seats that face onto each other.

The chairs are made from cork adorned with graphic motifs and surrounded by scented plants. They were created in collaboration with Maher Model Makers to challenge traditional outward-facing public seating.

Jesmonite and waste coffee grounds from local cafes were used to craft the monolithic Sobremesa bench, named after the Spanish tradition of relaxing after a meal with a coffee.

Located at the Royal Exchange, it was conceived by Pebble Haus to encourage friends to catch up over a cup of coffee after time apart.

Edinburgh-based architect Nick Green has also used waste to create his bench, which is named Do you care about your city?

Fragments of litter are sealed within concrete and resin to evoke terrazzo, reminding passersby of the lasting impact of litter on the environment.

They were designed by Sohanna Srinivasan for a site by Toynbee Hall in collaboration with Joyce and Joyce Joinery and A Small World to encourage conversations between different communities and age groups.

The final bench is A Cuppa by The Mad Hatters. Installed at 20 Middlesex Street, it takes the form of a giant teacup covered with bright patterns colours.

It celebrates drinking tea as a ceremony that unites people across different cultures and communities and encourages passersby “to pause and have A Cuppa”.

The City Benches competition is organised annually with the Cheapside Business Alliance and City of London Corporation. The benches will remain in place until the end of June.

Last year’s winners included a concrete pineapple and a pair of colourful cartoon eyes that look up to the sky.

Photography is by Agnese Sanvito.

London Festival of Architecture (LFA) takes place from 1 to 30 June 2021. See Dezeen Events Guide for all the latest information you need to know to attend the event, as well as a list of other architecture and design events taking place around the world.

The Ambassadors by Hans Holbein the Younger

Almost one year after listing their Beverly Hills property, John Legend and Chrissy Teigen have finally found a buyer....