When there weren’t any customers in the Sherwin-Williams store where he worked in Athens, Ohio, the Ohio University senior Tony Piloseno experimented with the store’s paint mixers. Beginning in December, 2019, Piloseno shot short smartphone videos of colors plunging together in saturated, psychedelic swirls and the mixer spinning and shaking the metal buckets around. He added in unlikely ingredients like glitter, glowstick liquid, and even blueberries to various concoctions, unveiling the final hues with a flourish. When he posted the videos to the social network TikTok, they gradually racked up hundreds of thousands of likes. Piloseno’s paint went viral. 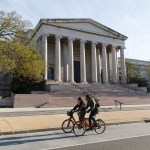 Sherwin-Williams wasn’t as amused, however, according to according to BuzzFeed. Piloseno had tried to pitch his TikTok account, @tonesterpaints, internally as a brand marketing channel for younger audiences, taking advantage of its over 1.4 million followers. But in early November the company decided to fire him for “gross misconduct” after customer complaints about stunts like the blueberries (which did result in a beautiful soft blue color). Now Piloseno is mixing colors like key-lime green at home—not as high-tech, but his audience is growing faster than ever. He even created a Gofundme to launch his own paint brand. “It’s hard to explain, but I really enjoy mixing paint,” Piloseno told BuzzFeed. “I like showing what stuff it can do.”

TikTok, which provides an endless feed of videos under one minute long, thrives on visual stimulus. The more eye-catching a video is—with fast editing, special effects, or just an impressive vista—the more likely it is to get the millions of views that TikTok’s algorithmic feed can deliver as it recommends the clips to more users. Videos showing off room decor, DIY projects, and luxury apartments are all prominent genres on the platform, but paint mixing has become a major trend, and not just for Piloseno.

Maybe it’s because so many people have painted their walls at home during quarantine that we’re suddenly fascinated by mixing colors. The Australian comedian Christian Hull made a name for himself and hit media headlines by recording reactions to paint-mixing videos on TikTok, netting over 900,000 followers. As the various mathematically apportioned paint hues jet into the buckets from a machine, Hull frantically tries to guess what color the end result will be. Mustard yellow? Royal purple? Basic gray? It’s fun to try to guess on your own, but the comedy is in Hull’s frustration. Meanwhile, the painter Chris Breier (150,000 followers) uses a more traditional palette and brush to demonstrate how to mix colors for a still life, copying the exact orange-yellow of a pear’s skin or the pink of a radish. Breier explains his strategy as he goes, providing a useful tutorial for amateur painters. Fritz Proctor of @fritzdoesart (590,000 followers) does the same with a palette knife.

A man named Brendan, who runs @paintturner, might be the most influential Paint-Tok account, with over four million followers (Hull records reactions to his videos). They’re minimal, without commentary or soundtrack, just the jets of paint, the shaking, and the final result in a can of Kelly-Moore color sample. Brendan enlivens the process by taking requests from his TikTok commenters, matching colors, shaking the cans by hand, and adding his own a-capella effects. Still, the videos are mostly banal and repetitive; the steps leading to the final color are the same.

Such similarity wouldn’t succeed so well on any other platform; paint-mixing videos seem perfectly adapted to TikTok. There isn’t enough material to fill any more time than a minute and you don’t want to watch more than a few clips of colors getting mixed at a time—the genre wouldn’t be suited for YouTube channels or Instagram stories, where they’d quickly disappear. TikTok’s automated feed also mixes up the paint clips with everything else you’re interested in, so you encounter them sparingly as brief sensory breaks between videos of pranks or meme-dances.

The vaguely industrial context of a paint-mixing machine, redolent of the cold, cavernous spaces of hardware stores, makes the videos reminiscent of How It’s Made, the long-running documentary series of mass-manufacturing assembly lines. The way the account owners reach into the camera frame to open a bucket or take one out of the machine bring to mind autonomous sensory meridian response (ASMR) videos, in which the star performs soft, specific actions and often narrates them in a whispery voice, tickling the viewer’s brain. Another TikTok star combines these two contexts: Dylan Lemay mixes paint instead of ice cream, giving a behind-the-scenes view of the Cold Stone Creamery where he works (though with seven million followers he may not for long).

Paint mixing videos are jacuzzis for your eyes, and not just because the colors swirl together into spirals like small whirlpools before they coalesce into uniformity. They don’t mean anything. They’re not trying to communicate a message or make an argument. Sometimes they make a reference to the outside world—replicating a color from Star Wars, for example—but for the most part they’re totally abstract. The saturation of the pure colors going into the mix is like looking at a field of flowers. If you’re not a professional, the end result is usually a surprise. What’s not to like?

After all, such pigmentation has fascinated humanity for millennia. We’ve come up with various theories to explain it; the ancient Greeks thought there were four basic colors and it took Isaac Newton until 1672 to split white light into its component rainbow. But we’ve always been aware of its deep emotional resonance, which comes through even through the filter of 21st-century social media. As Goethe wrote in his 1810 Theory of Colors: “Colors are the deeds of light, its deeds and sufferings.” Each new hue always communicates something to us as the lid comes off the bucket.

A KALTBLUT exclusive. Jos Jacob is a multidisciplinary artist who lives in the north of The Netherlands. He’s specialized...

Self Made by Gianfranco Villegas Fall/Winter 2021 – KALTBLUT Magazine

“The realm of purity” – For Fall/Winter 2021, Self Made by Gianfranco Villegas catharsis, materialized through inspirations from the...

We are in times of change, times where the voice of many must unite, young people of many stereotypes...

#LoversontheRun – DÜSK Budapest is a progressive Budapest based emerging fashion brand, which is working with urban design, futuristic...

The Dreamy New Retail Space Of A Professional Plant Charmer

r/architecture – Urban clickbait? Why ‘iconic architecture’ is all the rage again