by sephina
in Architecture
4 min read
0


I have a special relationship with informality. My childhood home surreptitiously grew along with me. My family’s living space doubled in a matter of months when I was 12. After the fall of the communist regime, the partizani neighborhood as it was colloquially known, was transformed from a meticulously planned high-modernist block, to a novel form of urban bricolage.

Apartment and neighborhood morphing in Tirana

From this perspective, informality is constant, encroaching entropy to formal design. It wages a constant war of attrition towards abstraction. Akin to Chinese water torture, Euclidian formality can disappear within a generation as a consequence of slow but repetitive degradation. Whether its a shrub peeking through a concrete crack, a pothole, or the first broken window in a dilapidating building, there can be no rational design without persistent maintenance.

In The World Without Us, Alan Weisman describes a possible future in which humans have disappeared. Slowly, but steadily, wilderness reclaims our infrastructure, erodes our buildings and erases our presence. Weisman illustrates how our sense of timelessness can be demolished by cutting an eighteen inch-square hole into a roof and simply standing back; waiting for nature to take its course. In a matter of years, the building will have transformed into a shell, a vehicle for Gaia.

Institutional order and rigidity have their informal enemies in corruption and inefficiency. To keep this in check we have invented bureaucracies and procedure; but even after tens of thousands of years of trying, we have not been able to iron out informal challenges to formal order. Professor James Scott explains how all systems have inherent informal processes. Whenever authority attempts to render complex society more legible through formalization, informality goes underground but it certainly does not disappear. On the contrary – it’s the institutions that run the risk of breakdown if they do not recognize the power of informality. CIA’s forerunner, instructs in its 1944 Simple Sabotage Field Manual how agents can interfere in organizations to undermine production. The first and most important rule from the manual in essence states that overt bureaucracy can easily muddle the waters:

Insist on doing everything through “channels.” Never permit shortcuts to be taken in order to expedite decisions. 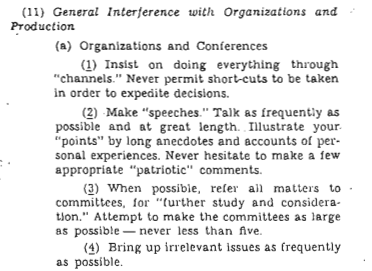 This artificial form of entropy is similar to work-to-rule strikes – being thoroughly procedural can make every system fail: it’s a strategy sometimes used by unions in order to gridlock systems through absolute compliance. Informality is the lubricant to a well designed engine – regardless of manufacturing precision, pistons will grind to a halt when not properly oiled.

Ultimately, informality is intrinsic redundancy – the more redundant a system is, the less it is prone to fail completely. Cities can engage in low-risk high-reward behavior through informality. They can explore potentially successful niches at low cost, while exploiting what is already abundant. Fashion brand executives look at the informal market for validation: if a product is not being plagiarized it’s not working well enough. This is akin to scout bees that switch out of group behavior in order to research new sources of food. Failing to recognize the importance of informal processes only renders formalizing attempts more futile than they already are; it speeds up eventual entropy.

Originally posted on thinkthinkthink a newsletter on cities, science and complexity.